Long time readers know of my annual trek to Chicago to attend the ABA’s TechShow and the huge amount of time and effort I would put forth each year to get as many of you as possible to attend with me on a LegalTypist SuperPass.  See here, here, here, here and here

Through the years, the LT SuperPass is responsible for just around 140 attendees.  I am proud to know that the LT Superpass brought the first law school educators, peeps from as far away as Europe, and several LT SuperPassers would go on to be tapped to BOD positions.

It’s been mentioned that after I spoke at the event in 2013, I stopped attending and while I would still do LT SuperPass, my heart was just not in it.  Not many of you know why I kept only a virtual presence after finally reaching what was, for me, quite a personal achievement of being tapped to speak at ABA TechShow in 2013.

In a nutshell, after accomplishing what I thought would never happen and while riding the wave of my personal success and triumph over public speaking – I was shoved down a rabbit hole from which it took years to recover.  I share not the details of what happened, nor the “official” follow up, as they truly do not matter.  What I have finally come to realize is that I gave weak men with no honour far more credit (and power) than they deserve.

Those who know the details of my journey applaud my return in spite of past circumstances.  Me? I’m sorry it took me so long.  I truly missed being around all my legal geeky peeps and seeing the latest and greatest.  Not to mention learning that one little thing that makes my keyboarding and use of Microsoft products that much less painful! 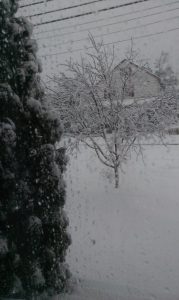 As I had in years past, I planned a meet up for the night before, but Mother Nature had other plans and was adamant that I miss the eve of TechShow.  When you have a fear of flying and the forces of nature ground ALL planes on your day of travel – you simply accept, grab the next possible flight and contact all you were hoping to meet that night to make arrangements for another time.

That’s one thing about TechShow: while you are in a constrained physical location with all those you are connected to on line – if you don’t PLAN to meet, chances are you just might not and you think on the plane home: Dang it! I never got to meet so and so (ahem @inspiredcat)

Sadly, not only did I have to cancel my own meet up, but the weather glitch meant I was unable to attend the other functions on Wednesday, including the Legal XX Symposium – where I would have had opportunity to cross paths with many of the women in legal tech. To learn more about this event, click here.

As for getting me to Chicago after the storm … fortunately, I was able to catch a noon flight out of LGA and so was in Chicago in time for dinner. The weather, while cold, it was quite sunny on Thursday.

The New To Me Venue 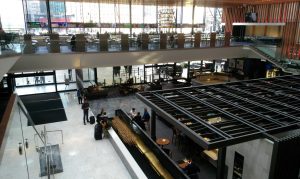 ABA TechShow 2018 returned to the Chicago Hyatt Regency “on Wacker”. This was a venue it had utilized to host the show before my time. Every TechShow I had attended until now was hosted at the Hilton, across from the Lake and Millennial Park and within easy walking distance to, well, almost everything one wishes to do, see, or taste while in Chicago.  It’s hard NOT to go out when you see all going on around you at the Hilton.  By comparison, the view out my window at the Hyatt looked down on highways/byways and I saw no people at all.

Along with being a far more walk about Chicago friendly location, I also preferred the Hilton for the layout of educational to exhibit – a quick run down the stairs to go ask someone something before your next meeting and that included the ABA’s Concierge or a vendor.  Very easy access to your room too if you needed to drop something off or get a little work done.

Whereas at the Hyatt, just to get to the TS conference space, you had to cross the massive lobby, take 2 escalators down, travel a long hallway and around a corner.  The traveling continued if you had a question for a vendor — for THAT you had to go across the Educational floor and take another, even longer escalator down (so long it had no stairs) and then through the tiny door in the wall of glass at the bottom to enter the exhibit space. (bit confused as to why the glass wall… does it rain in their sub sub sub basement?)

ANYWAY, on the other side of the glass doors was the entrance to the exhibit hall.  Oddly, they had a vendor in the spot I would have used to highlight participants of the Start Up Alley, the Women of LegalTech and/or placed the LPM books <- so people have something to buy and read on the 3 escalator journey to their rooms! ;)~

Getting past the the entrance, the rest of the Exhibit Hall was really quite lovely. The flow and booth size made the space feel not at all as cramped as the entrance.    About the only suggestion for improvement would be to group the techs a bit better. Otherwise, I thought the expo space was absolutely fabulous and much nicer than in year’s past.

As for your room – East Tower at the Hyatt was not so bad as it was just an additional elevator ride after crossing the massive lobby when you emerged from the conference space.  However, if you were in the West Tower — keep walking! My TechShow partner in crime Ed C. was in the West Tower and we noted he walked over 3.5 miles in 1 day <-all without going outside! 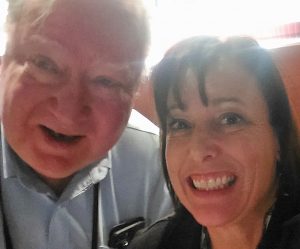 Me and Edward F. Cunningham, Esq.

In fact, the only time I left the hotel was to get in an Uber with the gang to go out to dinner.  Virtual waves and many thanks to the hosts of Thursday’s dinner: Nerino and Bryan (Stalker) S, along with fellow diners Andrea G, Ivan H, Alan F, and Julie T <-aka @ThinkPinkLaw 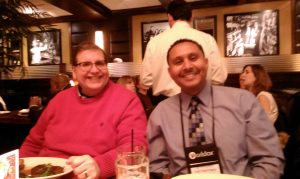 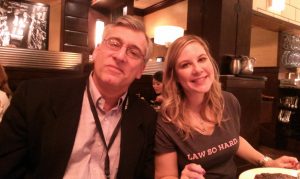 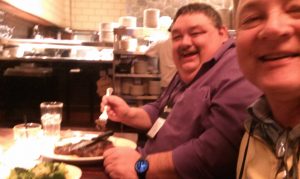 I have been advocating a people centric approach to everything, including trade shows and educational events, for as long as I have been a Virtual Assistant. See, It’s Not All About the Tech – People Are Part of the Process and Virtual Bar Association

This year’s TechShow, from an educational perspective, remained solid, sprinkled with a few duds. The mixing of experts with co-presenters from sponsored companies did not appear to be a problem, although the two dud presentations I attended, needed an actual expert.

That TechShow teaches tech, not just talks about it, is the reason I recommend it to those in the practice of law. You will pick up at least one new way of doing something to make your life easier.

Who did I enjoy? Of course, any of the Affinity speakers is already so comfortable with their topic, it’s usually a very interactive and fun session to attend. I personally enjoyed Paul U’s session on Time Management and I heard numerous kudos for Barron‘s sessions as well. From the more geeky peeps, props go out to Sharon N and John S; Lincoln M, Brett B  and Tom M.

From the 60 Tips, I was elated to see a slide that said Virtual Assistant by Debbie F, but disappointed in the recommendation of freelance crowdsourcing sites for those in the room to search for a VA.  Oh well, there’s always next year <-a phrase I have been telling myself since the first 60 sites session I attended over a decade ago! 😉

One item I wanted to mention was the Lunch n Learn hosted by The Form Tool and presented by Bob C. First off, I was blown away by the new product he announced: Aurora. If you know The Form Tool – you understand how it takes data and fills it in the right spot. Now picture this, instead of you entering specific data – the data is collected from a webpage. So your form is hosted and the data can be provided from anywhere. *mind blown* 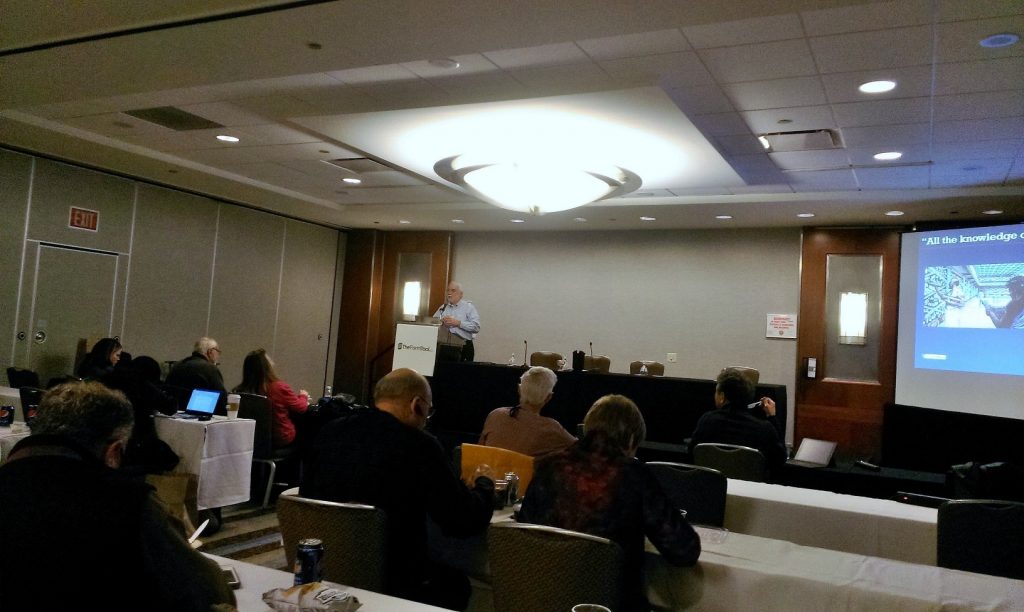 I really expect to see great things from Bob and this company as the concept and use of Aurora spreads!

Along with learning of pioneering technology such as Aurora, I also enjoy catching up with the new and exciting and a few of the solid players in legal technology on the exhibit hall floor.   Here’s a few shots I took during one of my walkabouts: 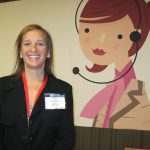 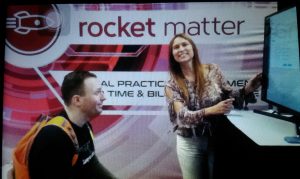 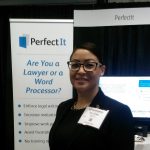 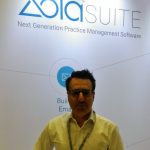 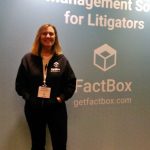 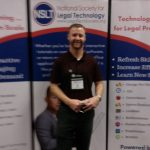 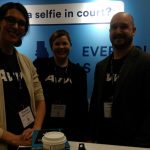 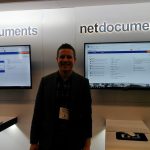 Everyone knows I go to TechShow for the people and this year was no different! I was so happy to connect in real life and for real hugs with Christy B, Alan F, Andrea G, Ed C, Mark H, Chris H and the rest of the VBA’s MeetnGeekers.

While touring the exhibit hall, it was great to see Ian from LitSoftware, Diana from CallRuby (she even brought a box of chocolates “in case” I showed up xoxo), Kim from RocketMatter, Sam G from Lawyerist, Christopher A, Nancy D. and Natalie K. along with Ivey of PerfectIt and Lecia of GetFactBox.

Jim C and I crossed paths at the escalators; Jared C, Brett B, Britt L Catherine R and Heidi A outside the sessions and I even caught Marc U on his way to the airport.

I also enjoyed meeting many of the VBA’s #LadiesofLegaltech — their stories are so different, yet so strangely the same.  Keep an eye out for future posts highlighting these wonderful women and their determined spirits!

So, after a 5 year hiatus, my return to ABA TechShow was, as imagined, quite a trip! From reconnecting in real life with those I had done my best to be a known, liked and respected professional, to meeting up with the new and fabulous including all the #LadiesofLegaltech — definitely the PEOPLE are still the best part of TechShow!

Oh. And Ed. My shadow. We text almost every day, have met for lunch and plan to continue to do so … but he said he won’t be back for another 3 years. We’ll see about that Ed! <g>