My Personal Observations As Long-time Attendee of LTNY’s Expo Hall:

Contrary to the posts of all the vendors – and those mining the event for their own purposes – I can confidently tell you that the hallways were not jammed, the Expo Hall was not at all electric; most of the people in the Expo Hall were booth staff/vendors, and most of them looked bored and about as exciting to speak with as a goldfish.

I’ve reported about how attendance has been dropping for years.  I know I miss the days of the coffee lady screaming out at the top of the escalator, all the big wheels spinning and bells ringing … the almost circus-like atmosphere of only a few LTNY’s ago.  All have been replaced by plush carpets and hushed voices, and a lot of empty booths manned only by a sign to drop your card in a bowl to potentially win an i-something or portable video camera.

Sad to see that so many past strong exhibitors are gone. The solid products used at large firms along with those aimed and the solo/small firm market.  A peek at the sponsorship board is all you need to see how empty the event has become: 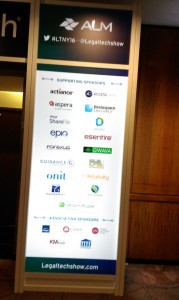 On the plus side there were a few newer exhibitors of value to those who work at law firms.  For instance, Konica-Minolta, the copier company that Mr. LT has been a part of for longer than I have been LT had a large booth.  FYI, I have long recommended the BizHub line from Konica Minolta – due to its ability to keep everything nice and secure.

Another newer exhibitor would be the file sharing service, ShareFile by CiTRix.  I got to have a lively conversation with John T. McHugh about just how secure their processes and tech are and I have a follow up call set to discuss their product further and how it can help attorneys and perhaps the users of LegalTypist.

Even though significantly smaller, LTNY is still really a show that focuses on ediscovery that hooks a few non-ediscovery characters into the mix – including a booth allowed to bring in a pen full of puppies in order to lure in their prey (and I thought the mime scared me)!

That said, there are really only 2 trade shows for legal and technology – LTNY and ABATECHSHOW – and now that both appear to have pay for play in place for speakers at their events, I’m at a total loss as to where to recommend for my clients to receive a decent education not sales pitches masked as education.